(Good for during Fasts) 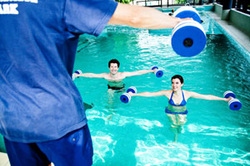 If you are not into highly rigorous exercise, then more moderate workouts like Tai Chi, yoga or exercising in water can all offer a low-intensity alternative, yet still make a series dent in your calorie burn count.

Water workouts
Exercise in water is a great workout and ideal for those who are starting out in fitness or coming back after an injury. There are a variety of options, from a full aqua aerobic session to walking on underwater treadmills.

The water supports your bodyweight, minimising the impact on joints. The number of calories burned is dependent on the depth of the water – the deeper the water, the greater the calorie burn. On average, a half hour session will burn around 200 calories.

Tai Chi
At first sight, Tai Chi may not appear as the most taxing of workouts, yet the flowing succession of graceful movements can be a great calorie burner. Tai Chi may be low impact, yet a half hour session can burn on average 140 calories.

When done correctly, Tai Chi raises the heart rate significantly (to approximately 60 per cent of maximum). In addition to the calorie burn, there are other benefits including improved strength, flexibility, concentration and balance.

Inline skating
Skating provides a great low impact workout which some studies have suggested provides the same level of aerobic activity as running. The calorie burn will depend on your size, effort and route, but half an hour skating could burn around 200 calories.

Skating develops muscles in the entire upper leg, rear end and hip, as well as the lower back. Muscles in the upper arms and shoulders are also developed when arms are swung backwards and forwards while skating. Increase your calorie burn just by swinging more vigorously.

Swimming
Swimming is a great cardiovascular workout and suitable for all due to the water cushioning on your joints as you swim. Breaststroke is the lowest intensity stroke and as such burns fewer calories – around 180 calories for a half hour session – but it’s also enables you to swim for longer.

Breaststroke expands the lungs, works the chest muscles and inner thigh, shoulders, triceps, legs and hamstrings – and some even swear it increases the size of your breasts! Swimming other strokes can increase your calorie burn.

Yoga
Yoga is great for improving your strength, flexibility, muscle tone and reducing stress – and as a calorie burner. Consisting of a series of deep-breathing exercises and ‘poses’, these can be adapted to suit any fitness level.  A typical half hour session will burn around 200 calories.

And the good news is you can do a yoga workout with working up too much of a sweat which is great if you are really pushed for time. If you want try yoga of greater intensity, then consider options like Hot Yoga, Power Yoga or Zero Gravity Yoga.

Walking
Quite simply the easiest and most accessible form of workout is walking. Without the joint jarring that occurs when running, walking is a workout that can easily be fitted into your daily routine or added as a leisure pursuit during your free time.

If you are not used to a walking workout, then start with a short distance at a comfortable pace. The number of calories burned will depend not only on your size, but your speed and route.  An average sized woman walking on a flat route at around 3mph will burn around 150 calories.

Note: Calorie burn figures are approximate as they are dependent on bodyweight, the intensity of the workout, routines or routes followed and individual fitness level.